Voronezh festival is mentioned on the FIDE site 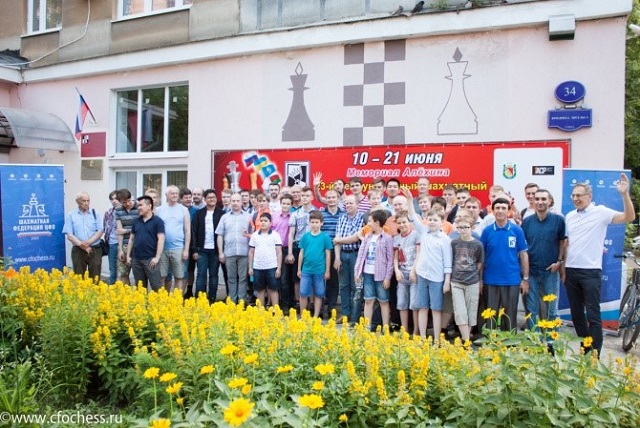 Being one of the most stable events of the Russian chess calendar, international chess festival “Voronezh-2019” traditionally started June 10. Despite of all the problems, the event director GM Alexander Raetsky every year manages to invite to Voronezh a lot of titled players and amateurs from Russia and many other countries.

It is the 8th time that Voronezh festival starts with the Chess960 tournament, but this year is special for Chess960. FIDE decided to organize official Chess960 World championship, and its preliminary online qualification stage is in progress now. There are not too many Chess960 events in the world, so each event with a good participant list is a rare opportunity to practice in this amusing chess variation. But Voronezh-2019 Chess960 also has an official status. Alexander Raetsky and the President of the Chess Federation of the Central Federal District of Russia Sergey Lazarev agreed to make this event the 1st Chess960 Open Championship of the Central Federal District.

67 players from 8 countries participated in the Chess960 tournaments, 6 GMs, 1 WGM and 7 IM among them. On short 7 round distance IM Zhamsaran Tsydypov (RUS, Ulan-Ude) is the winner with 6.5 points, GM Boris Savchenko (RUS, Moscow) with 6 points is the 2nd on tie-break and IM Alisher Suleymenov (KAZ) is the 3rd. A lot of special prizes were awarded to Central Federal District chessplayers, mostly from Black Soil region (Voronezh, Lipetsk, Kursk).

Tsydypov and Savchenko were also successful during the Rapid tournament (June 11, 151 participants from 10 countries, 13 GM, 2 WGM, 14 IM). Both managed to score 7.5 points of 9, as well as GM Puranik Abhimanyu (IND). Tsydypov was the 1st on tie-break and Puranik the 2nd. GM Ivan Rozum (RUS, Vologda) was the sole leader with 7 wins in the first 7 rounds, but remained only the 4th after two losses in the last two rounds. There were 13 ordinary prizes and a lot of special prizes, their winners are players from India, Moldova, Kazakhstan, Ukraine and many regions of Russia.